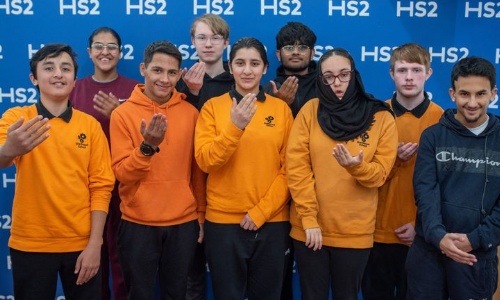 Braidwood Learners help shape the design of HS2’s stations and trains of the future.

HS2 and Braidwood Trust School for the Deaf hosted a red carpet premiere today (30 September) for a short film they have worked together to create. ‘HS2: Building a railway for everyone’ highlights the power of hearing in a station environment and shows how the school’s pupils are working with HS2 to ensure Britain’s new railway is inclusive and accessible for all.

It is estimated that there are approximately 11 million people in the UK with a hearing loss, which makes it the second most common disability, but the lack of visible signs that a person might need additional support when at a station or onboard a train can add to the challenges the Deaf community face.

When HS2 enters service at the end of the decade it will welcome millions of passengers with multiple and diverse needs. The innovative partnership with Braidwood School is just one of the ways that HS2 is listening and learning from disabled people to drive positive change.

“HS2 will serve Britain for at least 120 years, so it’s vital that we understand and act upon the day-to-day barriers the Deaf community face when using public transport.

“We’ve been inspired by the passion and enthusiasm the pupils have shown. They are incredible role models acting on behalf of the wider Deaf and hearing impaired community to drive positive change and really make a difference to the future of train travel in our country.”

Through a shared learning partnership established in 2020, HS2 hosted lessons and field trips for the pupils in partnership with Network Rail and Avanti West Coast. The students travelled on trains and visited stations, allowing them to demonstrate the multiple challenges and barriers they face. From audio announcements confirming platform changes, to the lack of visible information in toilets, Braidwood’s learners captured the many improvements they’d like to see.

Their findings were shared through a series of workshops led by HS2’s education team, which saw the pupils create models and pitch their ideas for change to HS2’s innovation team.

Train travel is a daunting prospect for many of Braidwood’s 70 pupils and the learning and research project with HS2 was the first time that some of its pupils had ever boarded a train.

“Deafness is a hidden disability, but today our pupils have shown they have powerful voices and how important it is that we all listen.

“It’s easy to take for granted the power of hearing in a busy station and crowded train environment, and that’s what we’ve aimed to highlight in the film. Our children need to be part of the world, whether it’s a hearing world or a deaf world, and this opportunity to influence change is really important.”

Ahead of the film’s premiere in morning assembly, Hodge Hill MP, Liam Byrne, spoke of his pride that pupils from his constituency are helping to influence the design of HS2’s new stations and British-built bullet-style trains.

“Braidwood School is a jewel at the heart of my constituency in Hodge Hill. Listening to the pupils this morning demonstrated just how important it is for major infrastructure projects, like HS2, to not just build projects fit for the future but to build projects that are inclusive of all needs.

“Braidwood’s pupils will benefit from the jobs HS2 will provide as well as using the railway itself. They are an inspiration to us all and it is great that HS2 has built such a strong relationship with them.”

Through its education and volunteer programmes, HS2 continues to work closely with Braidwood Trust School. It supports and inspires pupils to develop the key skills that will help them to build a career and hopefully play their part in the construction of Britain’s new railway.